Originally published on ClickOnDetroit.com. July 2015 represented the 40th anniversary of Jimmy Hoffa's disappearance. This was perhaps the final milestone anniversary in which "the most famous missing person's case in American history" would feel like contemporary history. Building on WDIV's investigative team's institutional memory of the case (a legacy that included alumni like Mike Wendland and Chris Hansen), ClickOnDetroit created a special section to the anniversary with a special webcast, print stories, and slideshows.

“Jimmy Hoffa's most valuable contribution to the American labor movement came at the moment he stopped breathing on July 30, 1975.” - Dan Moldea

Dan Moldea began investigating Jimmy Hoffa and the Teamsters in the months before Hoffa's disappearance. His 1978 book The Hoffa Wars remains one of the most comprehensive studies of the association between the Teamsters and organized crime.

Since his book was published, Moldea has continued to report on Hoffa's disappearance. He just released the second edition of his memoir Confessions of a Guerrilla Writer. ClickOnDetroit interviewed Moldea about Hoffa, the Teamsters ties to the mob, and what exactly happened on July 30, 1975. 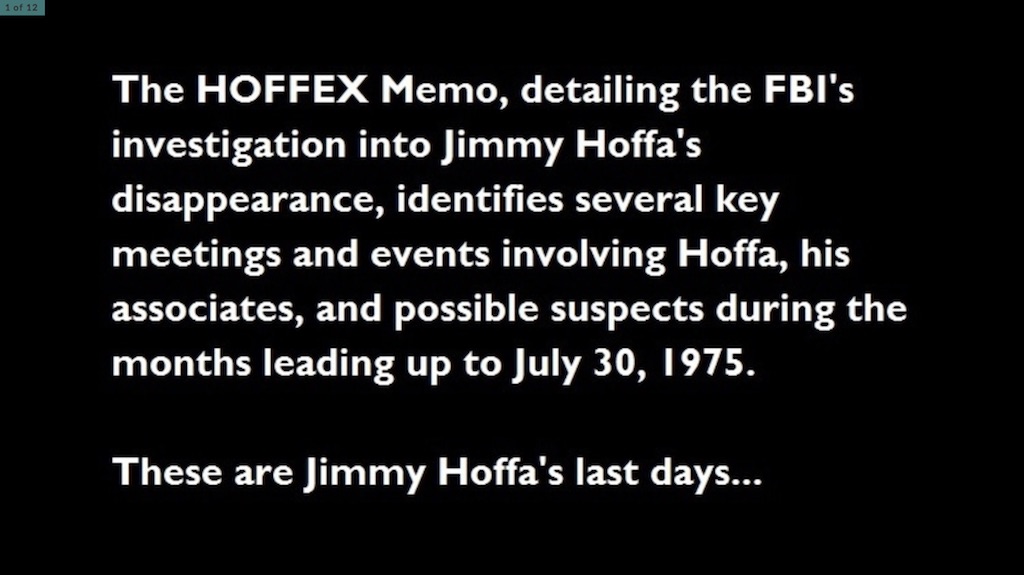 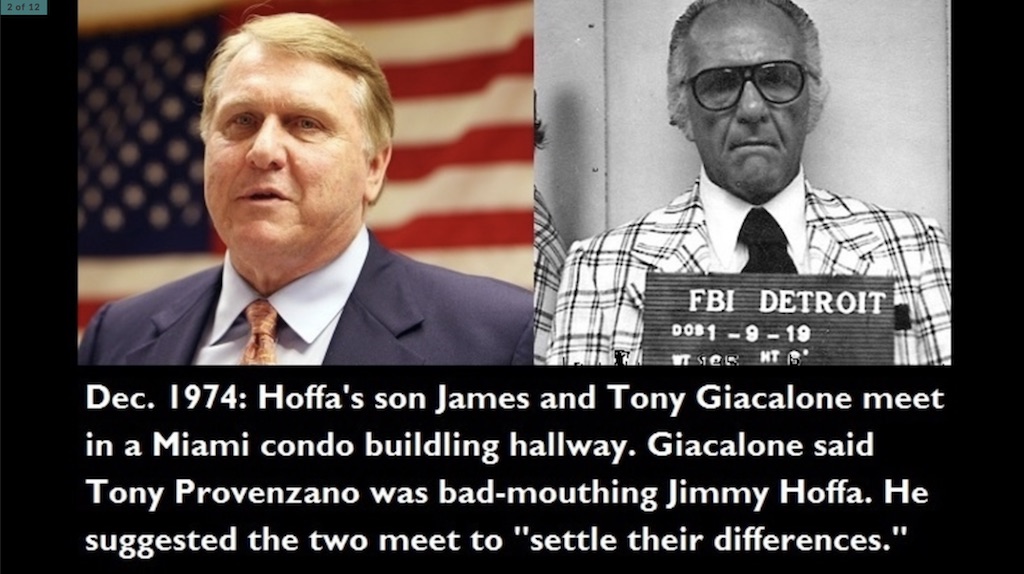 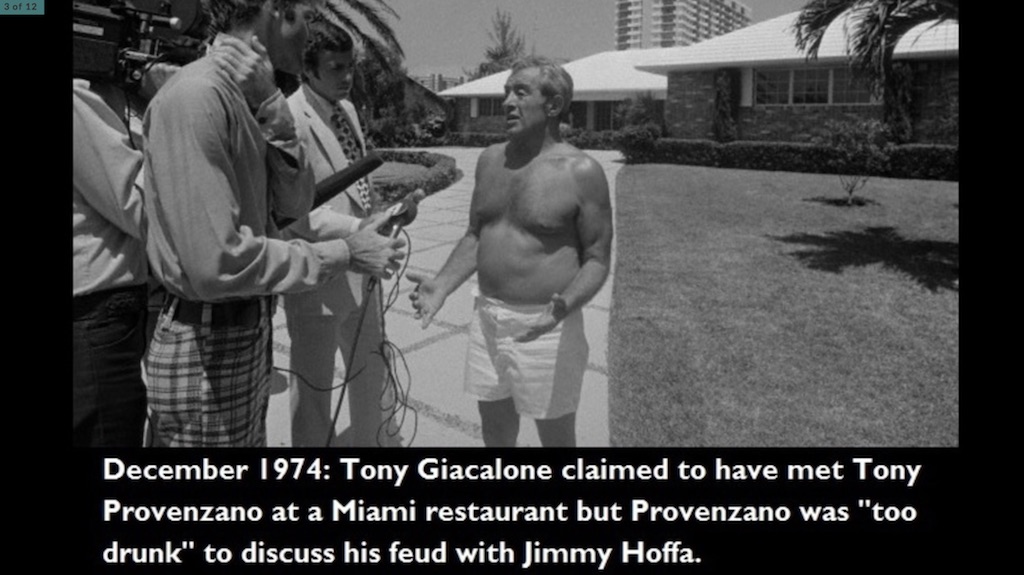 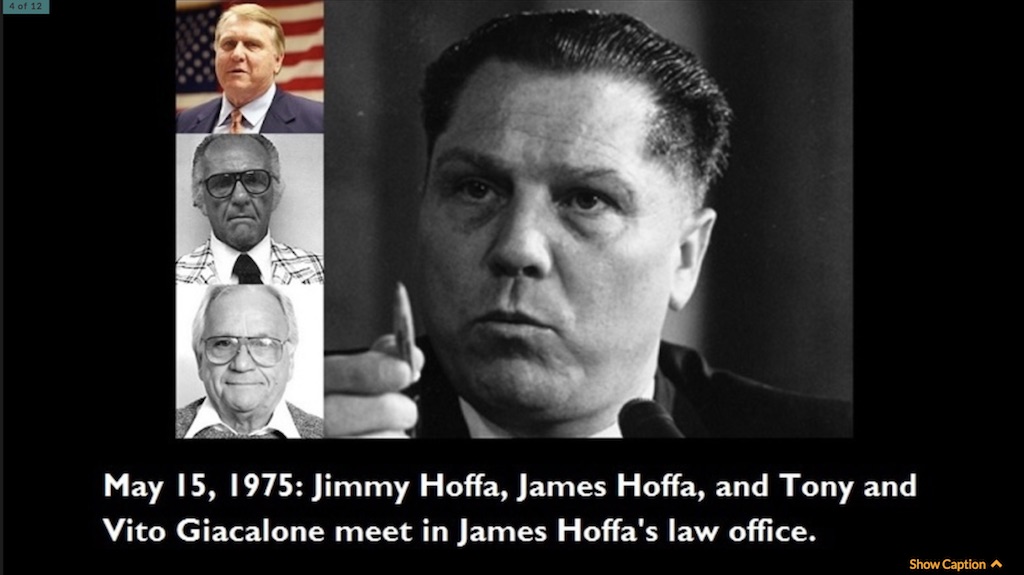 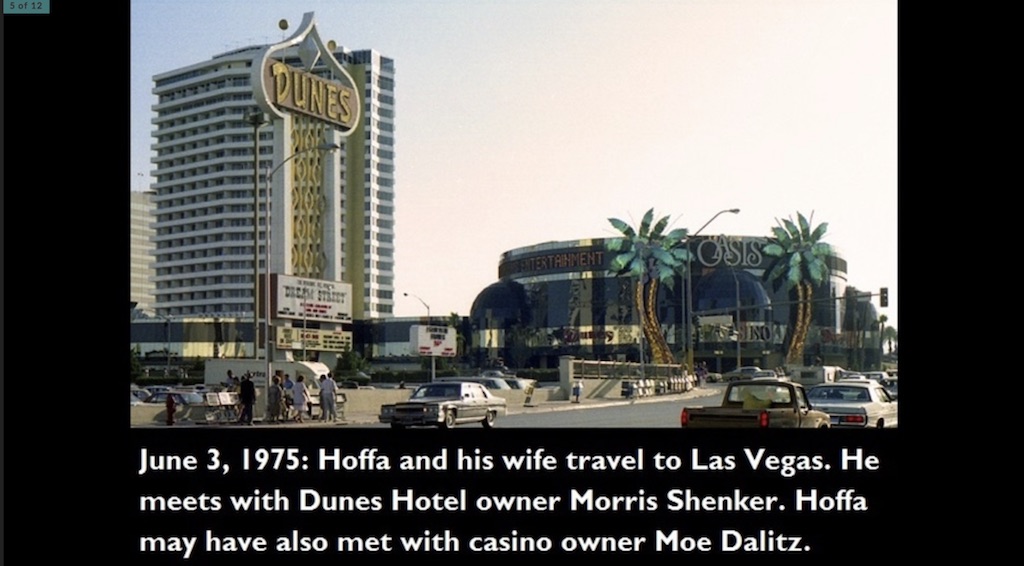 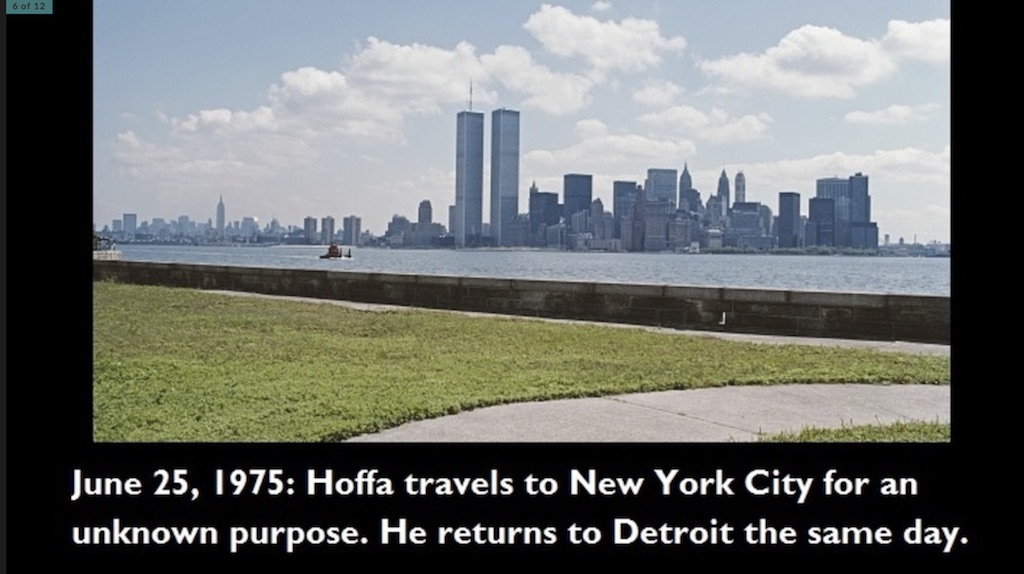 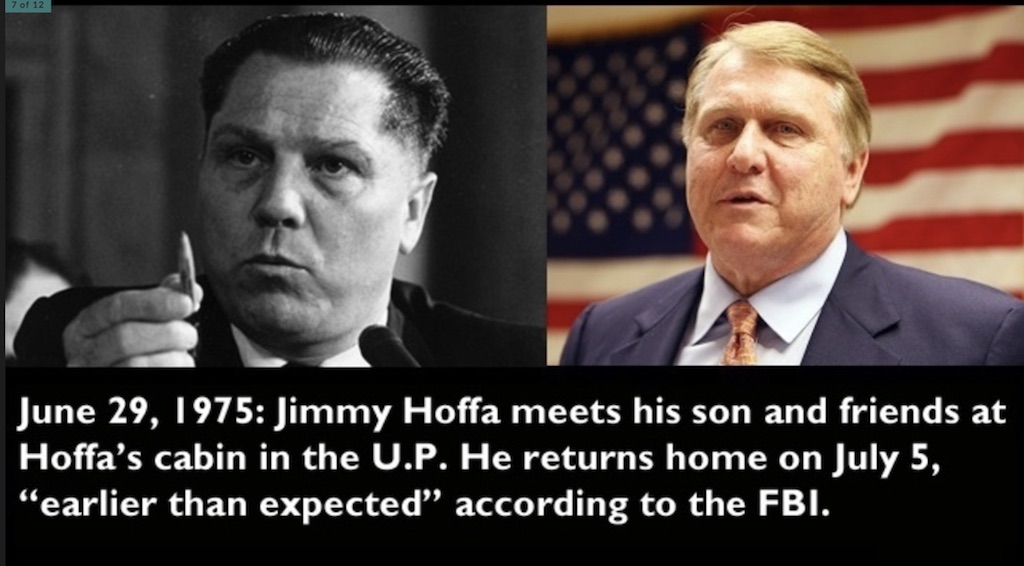 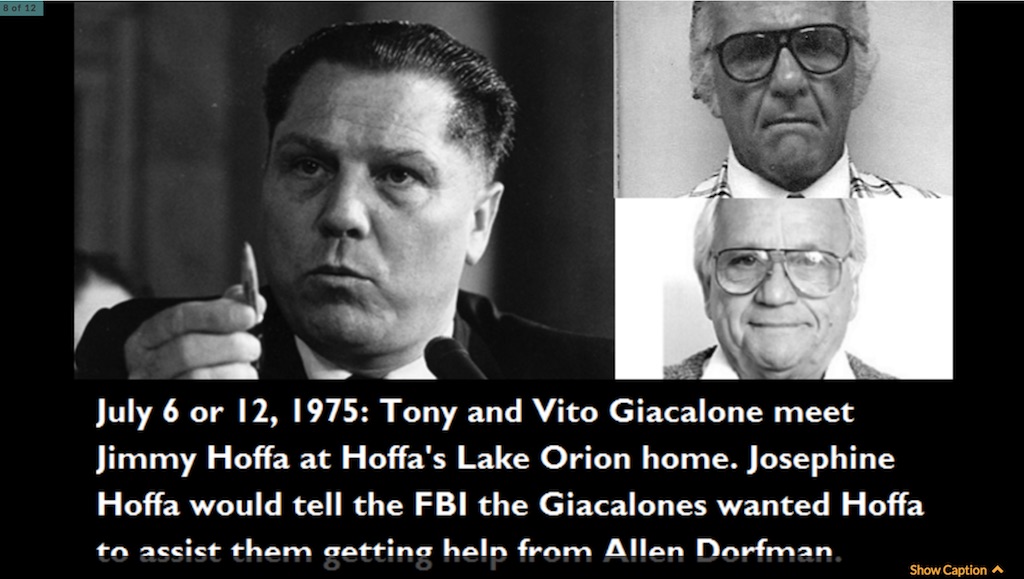 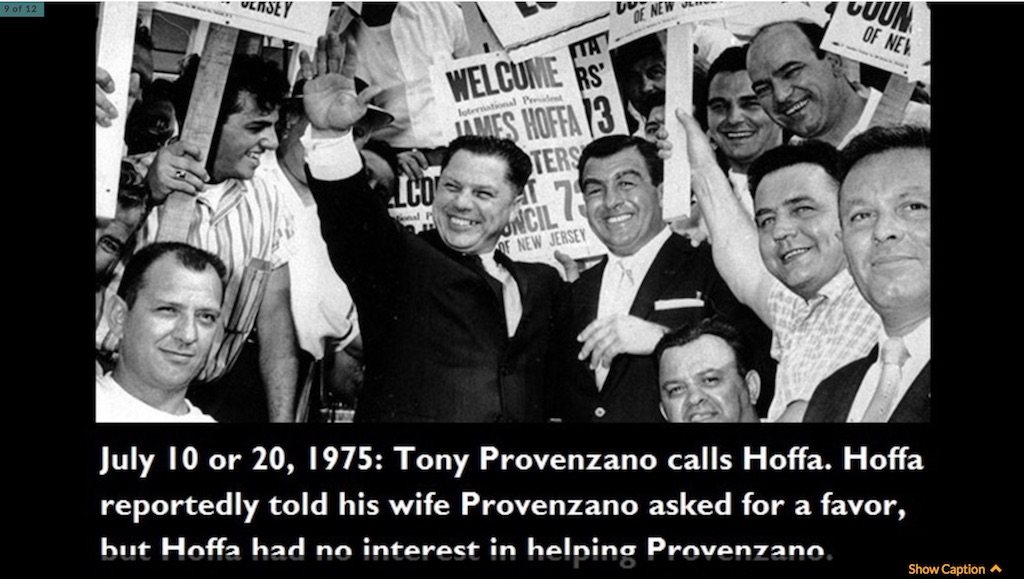 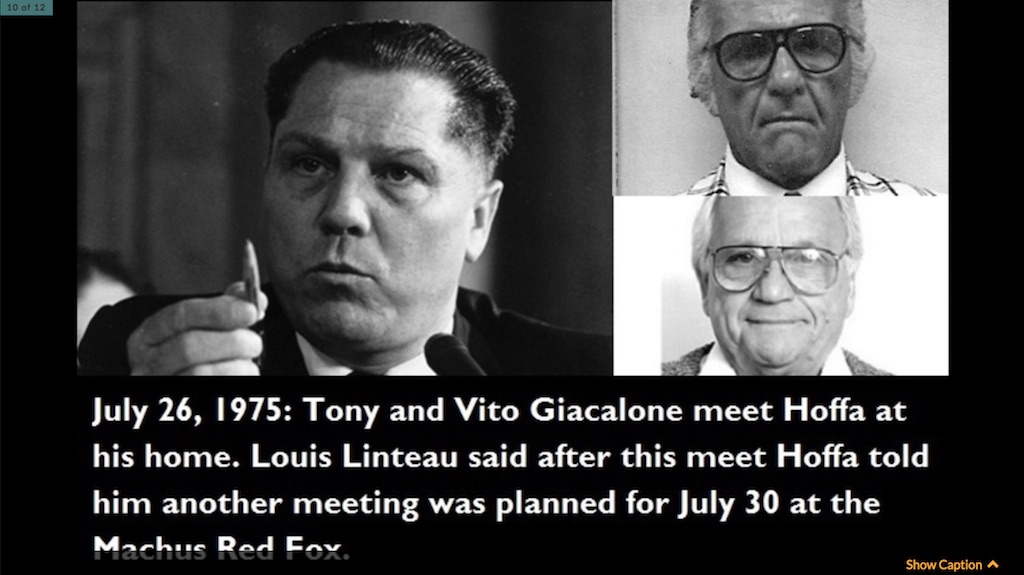 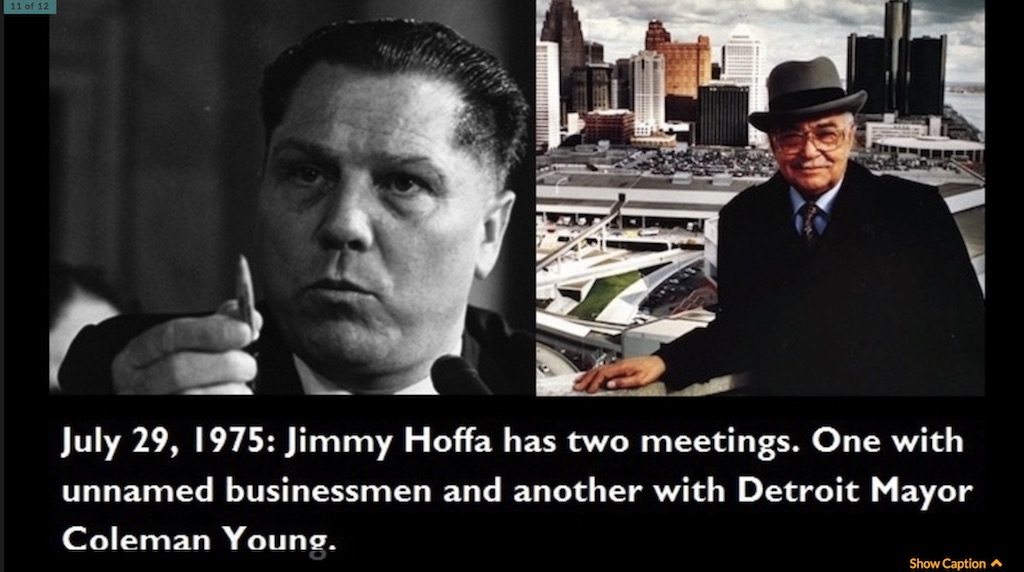 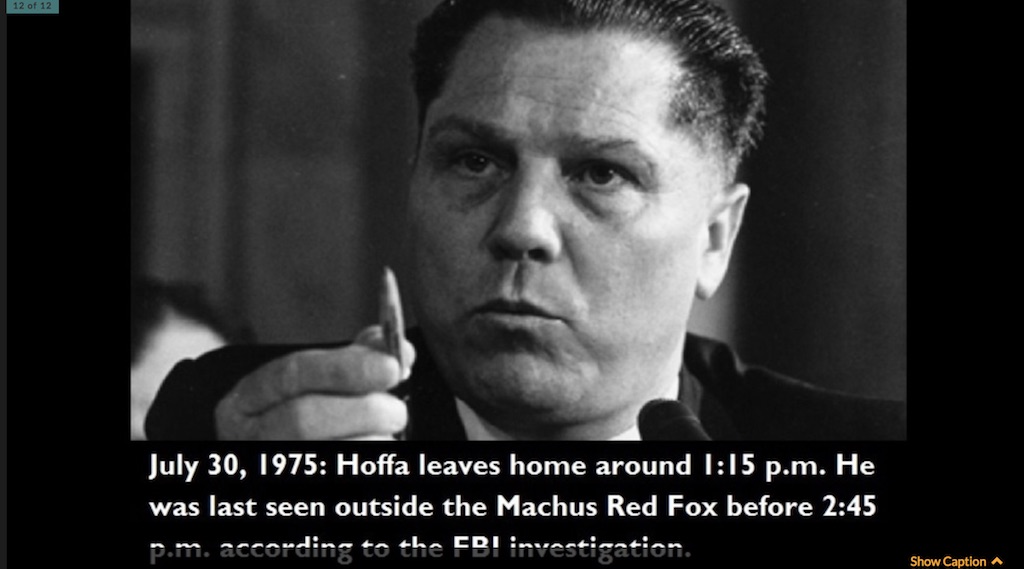 What do you think happened to Jimmy Hoffa and who was responsible?

The disappearance of Jimmy Hoffa was a three-act drama with different characters in each act.

Based on the best evidence—in my opinion—there were two and possibly three cars involved during the abduction of Hoffa in Act One. Hoffa, while waiting for a ride to be taken to a meeting with mobsters Tony Giacalone of Detroit and Tony Provenzano of New Jersey, entered a car which likely contained Frank Sheeran and Vito Giacalone and possibly one other person. (I do not believe that Chuck O’Brien was present in the main car. I think that his movements were unwittingly diversionary.)

In Act Two, based on new information I have received, I believe that Hoffa was taken to Rolland McMaster’s farm in Milford Township, the site of the aborted 2006 FBI excavation. Hoffa was killed by Salvatore Briguglio, who was the top lieutenant to Tony Provenzano, who, I believe, was actually present for the murder. Also, on the afternoon of the murder, McMaster was with his brother-in-law, who was the head of the steel division of the Gateway Transportation Company.

In Act Three, also based on new information I have received, I believe that Hoffa was stuffed into a 55-gallon drum, loaded onto a Gateway Transportation truck, and taken to New Jersey where he was buried at [Phillip] "Brother" Moscato’s landfill in Jersey City.

The murder was overseen by Russell Bufalino, then the boss of the northeastern Pennsylvania Mafia—with the approval of the Detroit underworld, then headed by Joe Zerilli and Jack Tocco. Provenzano selected the hit team and carried out the murder.

The FBI pretty quickly, based on the HOFFEX memo, identified organized crime figures likely involved in Hoffa's disappearance. If mobsters did kill Hoffa, why would they take such a risk knowing they were the obvious suspects?

I believe that the motive for Hoffa’s murder was that he was talking, even informing—directly or indirectly to grand juries, reporters, and at least one senate committee. His targets were those whom he insisted were betraying him and, thus, foiling his efforts to return as general president of the Teamsters. I believe that there was some desperation involved in silencing Hoffa as quickly as possible.

What kept authorities from cracking the case and making arrests?

No body was found, and all of the principal characters had established alibis. Since then, the trail has waxed and waned, and this cast of sketchy characters has been dying off. Meantime, the FBI and the media still keep an eye peeled for the one clue or confession that will lead to the final resolution of the mystery, perhaps even the recovery of the remains of the long gone 62-year-old ex-boss of the Teamsters Union.

Ultimately, what was the impact of the Hoffa disappearance for both the Teamsters and organized crime?

In the first sentence of The Hoffa Wars, I wrote: “Jimmy Hoffa's most valuable contribution to the American labor movement came at the moment he stopped breathing on July 30, 1975.”

What I meant by saying this was that, since the Kennedy Administration, there had been no effective war against organized crime by the federal government. In the aftermath of Hoffa’s murder, that war was renewed and, once again, became effective.

In addition, the Hoffa murder helped focus a bright spotlight on the blatant corruption that existed at the top levels of the Teamsters. Consequently, the rank-and-file reform movement within the union, led by the Teamsters for a Democratic Union (TDU), effectively began the process of taking back their union on both the local and national levels.

Hoffa's Teamsters were at the center of so many major events in the middle of the 20th century. How did the Teamsters become so enmeshed in national politics, organized crime, etc.?

“Teamster power” was all about its membership’s money and the Teamster high command’s willingness to spend it. The best examples revolved around the Teamsters’ investments in Las Vegas, which, to a great extent, was built with the financial support of the union’s oft-investigated Central States Pension Fund. And this vast reservoir of money attracted not only Mafia figures, but those in the legitimate business community, as well as American political figures.

Bottom line, organized crime cannot exist without political corruption, and the Teamsters Union under both Hoffa and Fitzsimmons often provided organized crime with a façade of legitimacy.

Talk about Teamsters in Detroit during the 1970s and the factions fighting for control of the union here. The mobsters, the left-wingers, Lyndon LaRouche's cronies , the Hoffa people, the Fitzsimmons people. Is there anything like it in labor history?

I had started investigating the Teamsters and the Mafia eight months before Hoffa’s disappearance. My first contribution to this case came with the discovery that a powerful Teamsters international organizer named Rolland McMaster had operated a 32-member goon squad which was running around the country, shaking down trucking companies and soliciting payoffs in return for labor peace. McMaster had been essential in Hoffa’s rise to power, but the two men had a falling out shortly after Hoffa went to prison for jury tampering and pension fraud in March of 1967.

Rolland McMaster was the former Secretary-Treasurer of Teamsters Local 299 in Detroit under both Hoffa and Frank Fitzsimmons. According to the FBI, McMaster was "suspect in numerous acts of violence within the Teamsters Union." The year…

I also discovered that McMaster, along with several of his goons, two of whom were Larry McHenry and Jim Shaw, were responsible for a series of grizzly acts of violence—bombings , beatings, shootings, and general sabotage—which had plagued Detroit’s Teamsters Local 299, Hoffa’s home local. Essentially this group—sanctioned by the international union and then-General President Frank Fitzsimmons, an ally of McMaster who also had gone to war with Hoffa—served as a firewall against Hoffa from his declared goal to gain local union office in defiance of the restrictions that President Richard Nixon had placed on the commutation of his prison sentence in December 1971.

If elected to office in Local 299, Hoffa would have become a delegate to the 1976 Teamsters convention. Back then, as opposed to a rank-and-file direct election of its leadership, it was at that conclave, held every five years, that the union’s general executive board, including its general president, were chosen. And Hoffa had aspired to regain the presidency of the union using his home local as the springboard.

The last act of violence in Local 299 was the bombing of a union car just twenty days before Hoffa disappeared. The car was used but not owned by Fitzsimmons’s son, giving the false impression that both sides in the Hoffa v. Fitzsimmons dispute were targets of violence. That bombing was allegedly arranged by Larry McHenry and Jim Shaw. Notably, during my interviews with McHenry and Shaw, they denied any involvement in this particular bombing. Still, they ratcheted up my suspicions with their bravado, as well as their expressed loyalty to McMaster and their visible disdain for Hoffa.

To me, this information was extremely important. I believed that if the conspirators behind the Local 299 violence were unmasked, therein would lie the solution to Jimmy Hoffa’s murder. I believe that McMaster’s alleged role in the Hoffa murder conspiracy confirms that.

Fitzsimmons, it would seem, was the man the mob wanted in charge of the Teamsters and the feds went after union pension fund operation during his tenure. But he also won contract victories and attempted to forge an alliance with Walter Reuther and the UAW. What is the real legacy of Hoffa's rival?

In 1961, Hoffa rewrote the Teamsters Constitution, centralizing power in his own hands. Through this, he had the ability to restrict dissent by placing local unions pitted against him into trusteeship.

Fitzsimmons inherited that constitution and that same power. He had the authority to block Hoffa from becoming an officer in Local 299—because of the Local 299 violence.

Further, as the antithesis to Hoffa, Fitzsimmons decentralized power, allowing the members of the general executive board to create their own fiefdoms around the country. That garnered Fitzsimmons the loyalty of the union’s newly-empowered vice presidents—who did not want Hoffa returning to centralize power once again.

Fitzsimmons might not have been beloved by his rank-and-file. But he was certainly appreciated by those on the Teamsters’ general executive board.

Hoffa, as IBT president, comes across as a corrupt villain in The Hoffa Wars. But when he's out of jail and fighting Frank Fitzsimmons, he appears to a more sympathetic figure, an underdog. Even reformers like Pete Camarata invoked Hoffa's name when fighting the old guard. Do you think he became a new Hoffa, so to speak, or was he the same guy looking to run the union as he had previously?

After Hoffa saw the extent of the resistance against him with the Teamsters’ leadership and his former allies in the Mafia, he tried to portray himself as a union reformer, as well as a champion of America’s working men and women. In this new role, Hoffa made tentative alliances with several rank-and-file dissidents, like Peter Camarata, whom I viewed as a very important union-reform leader, as well as Red Anderson, also of Detroit, a leader of the 1974 independent truckers’ shutdown.

In short, Hoffa was using the rank-and-file reformers, just like he was using the members of the press and anyone else who could help him regain power in the Teamsters.

What about Nixon's pardon? Has the historic record cleared up whether or not Hoffa was aware of the restrictions on union activity?

I don’t think that the issue of Hoffa knowing or not knowing about the restrictions has ever been authoritatively confirmed. However, it does not matter. Hoffa, who had a very bad time at Lewisburg Penitentiary, would have done anything and agreed to anything to get out of jail.

A little off-topic, but The Hoffa Wars portrays New Orleans District Attorney Jim Garrison as a mob crony and not the righteous crusader Kevin Costner played in Oliver Stone's JFK. How does Garrison's Kennedy investigation connect with the Teamsters?

Jim Garrison was controlled by Carlos Marcello, the Mafia boss of New Orleans. The key government witness against Hoffa in his 1964 jury-tampering trial was Edward “Grady” Partin, who was a long-time source of mine. Partin told me that Garrison had accused him of being involved in the murder of President Kennedy, saying that Partin had been seen with both Lee Harvey Oswald and Jack Ruby, driving around Louisiana. It was a ludicrous allegation.

Partin added that he had been contacted by Frank Ragano—the attorney for Hoffa, Marcello, and Santo Trafficante, the Mafia boss of Tampa—who said that he could make Garrison go away if Partin recanted his testimony against Hoffa. Partin refused.

Later, when Ragano turned against the Mafia, he corroborated Partin’s story, telling me that Garrison’s entire investigation of JFK’s murder was nothing more than a cynical attempt to deflect public attention away from Carlos Marcello, who, once again, owned Garrison.

Now You Can Blog from Everywhere!